We hopped on the bus straight from school Friday night ready to get our Snap Travel coach from Bristol to London to see the press performance of The Snowman at The Peacock Theatre London the next day, Saturday morning.

Soon after arriving at London's Kings Cross, Daddy's eagle eye meant we had this fab photo opportunity down in the Underground with the official The Snowman billboard poster. Once spotted the kids couldn't pose in front of it quick enough - we've been talking about seeing The Snowman since September and it's become an annual Christmas tradition. Lottie's holding her ears as she didn't like the loud noise of tubes pulling in to the platforms. 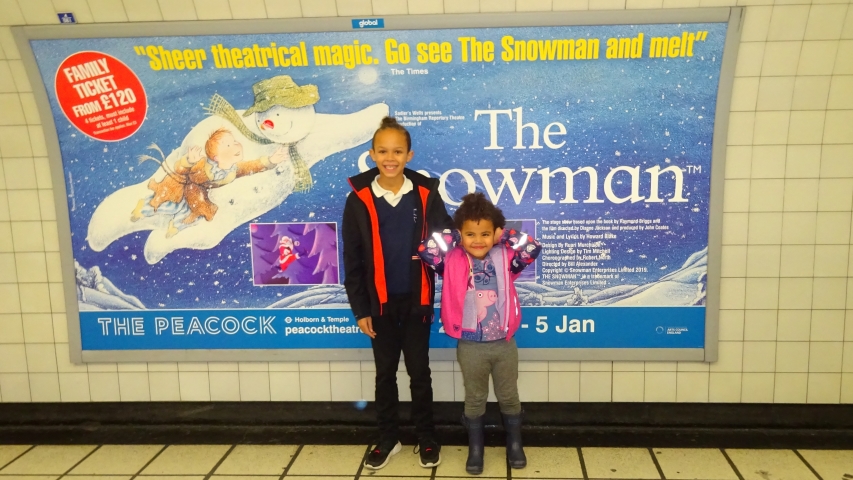 Once you have the excitement of posing in front of one poster you want to collect a photo of them all :-) By this time we're with the kids' favourite cousin and all dressed up for the theatre.
Of course no photos or videos are allowed during the performance so I took this opportunity to get a pic of the excited kids just before the curtain went up. 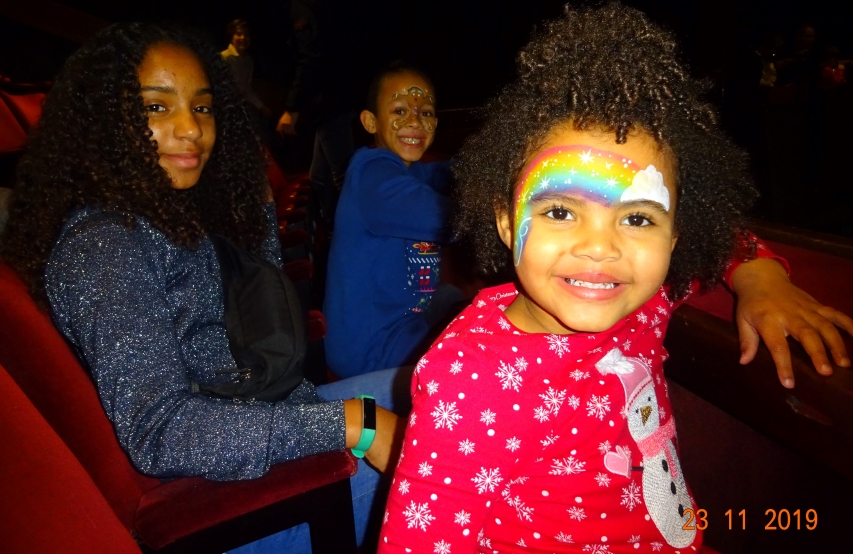 We went to Shrek's Adventure in the morning before The Snowman (yep it was a REALLY early start) during which time Lottie did not wear this dress as I was saving it for The Snowman. Cookie laughed at my ambitious plans to do a costume change on arrival at The Peacock Theatre but whilst I was settling the buggy in the buggy park and neatly storing all of our jackets within, my niece ran to the toilets and facilitated the required on-theme snowman dress wardrobe change :-) My Mum bought Lottie this dress a few weeks ago and once I told her about our imminent trip to The Snowman she couldn't post it over from Ireland quick enough - thanks Mum :-)

BEST bit about it is it has real snow glitter balls in the skirt that freely move throughout the skirt, so much fun! 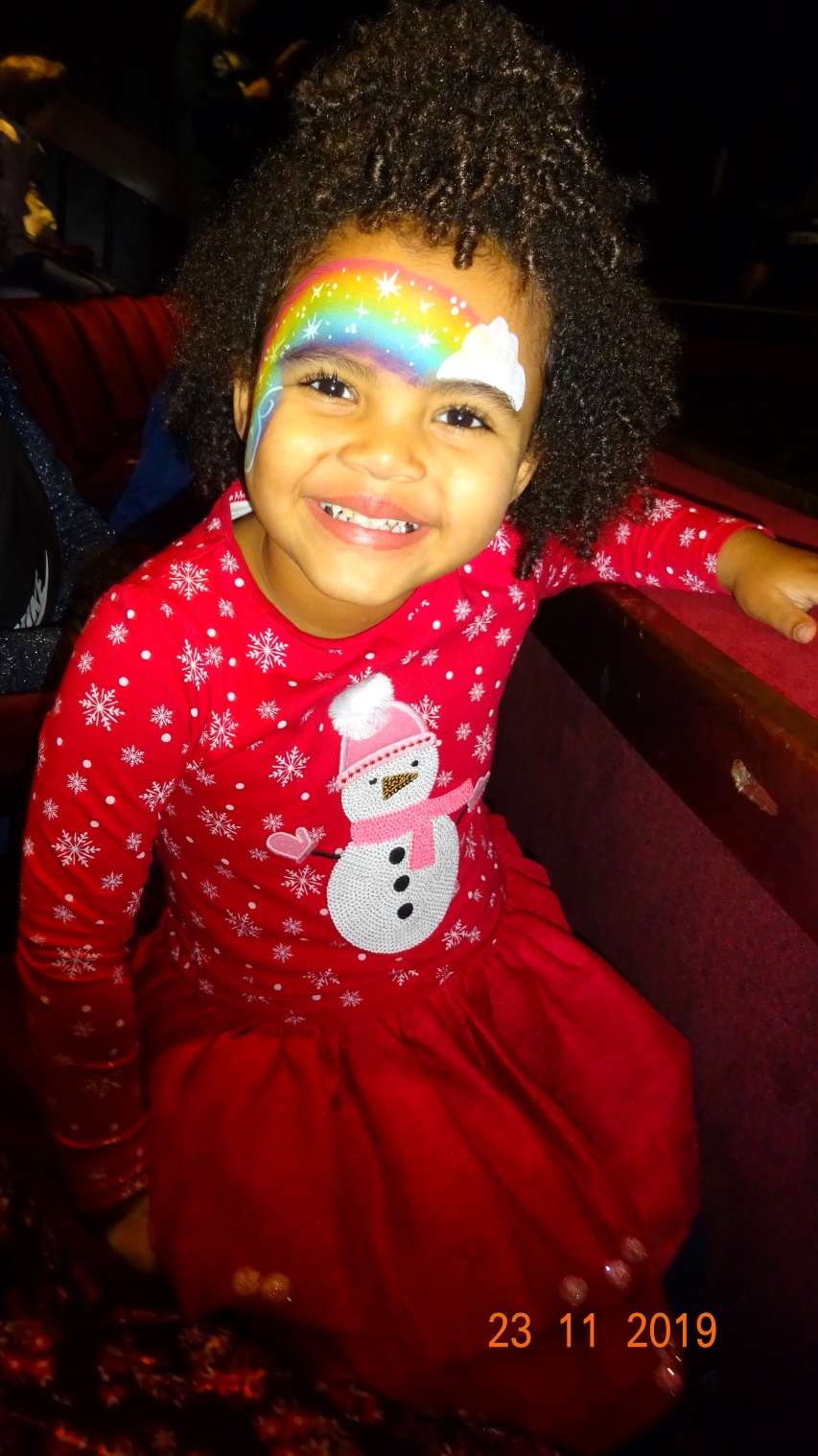 Absolutely riveted during the show despite their mix of ages - Lottie 3 Aaron 9 and cousin 11.  All of us adults were riveted too. I don't travel from Bristol to London for just anything and nope, we weren't there anyway for the weekend and we didn't even stay that night as Aaron had to attend the birthday party of a VERY close friend the next day. 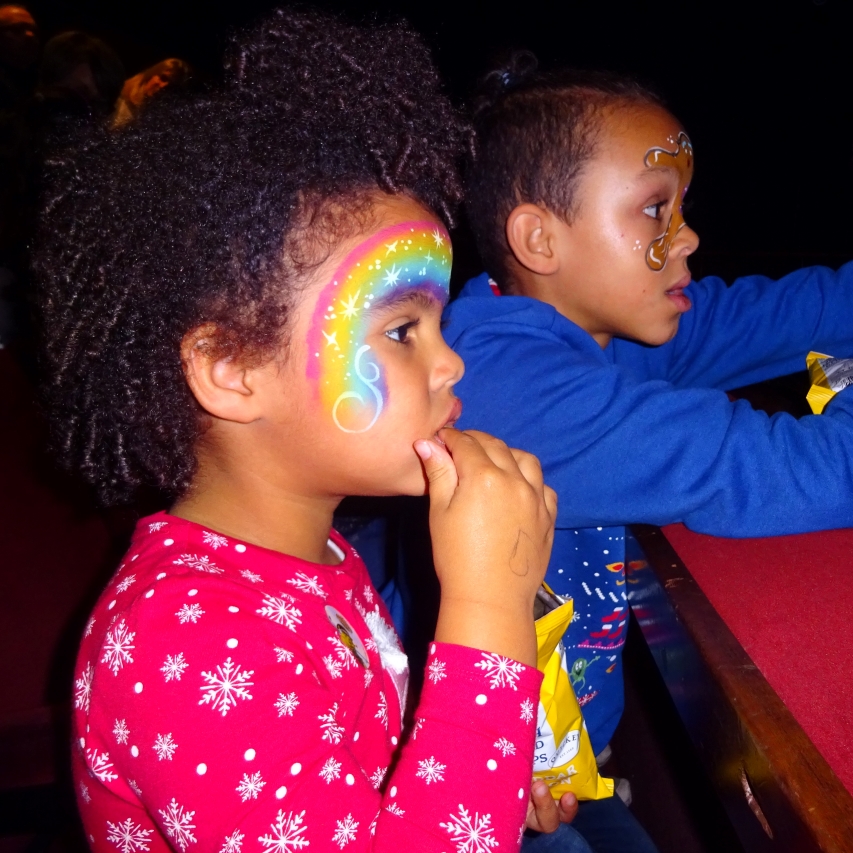 Being the good girl I am I didn't photograph or video any of the show but wanted to capture the kids with the BEAUTIFUL stage as a backdrop. Such butter fingers am I, by the time I did so, the curtain was half down and the rows below were starting to leave, but we'd just enjoyed the finale which is those lower rows getting covered in snow at the end which is SO SO very magical. Ruth include's videos of it in her carousel of pics on Instagram here: SNOW VIDEOS on Instagram swipe to 3rd and 4th

TIP: you get covered in snow if you are in the Stalls (which Ruth and Cookie were) but we were up in the Gods in the Dress Circle - front row though mind. From the Dress Circle you look down on all the snow falling fun. I was cool (forgive the pun) with that and so were the older 2 only Lottie wished she was down there but thankfully she didn't make a fuss. 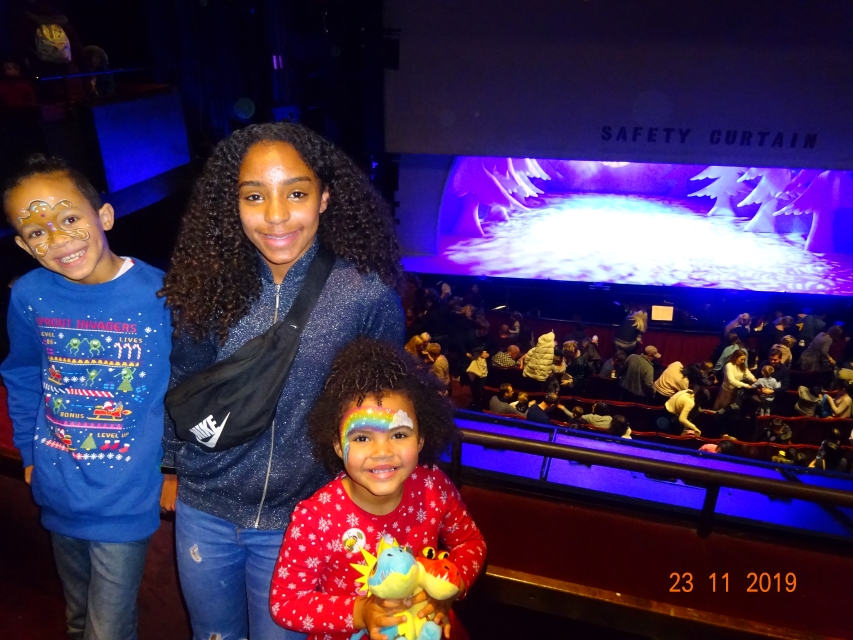 My most detailed review of the Snowman is from our visit in 2015 when I was heavily pregnant with Lottie - that time Aaron and his cousin did very much stand in the snow as below: 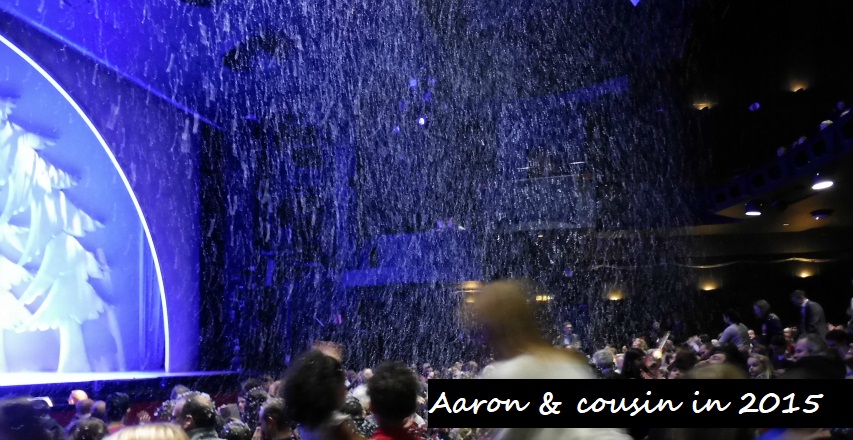 In their younger days during our 2015 visit, when 2 cousins came and Lottie was a bump:

The theatre has a couple of snowmen which we couldn't wait to have photos with, there's also a "shop" selling The Snowman merchandise, which make for fab Xmas presents. Cookie very kindly took the below photo for us: 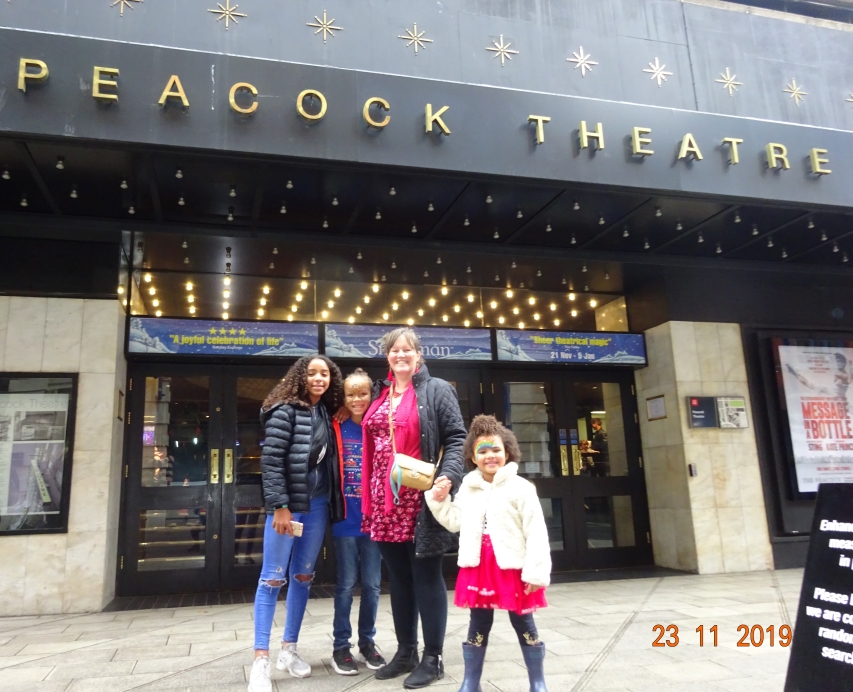 And then Lottie photobombed hers ooops but what a pose! 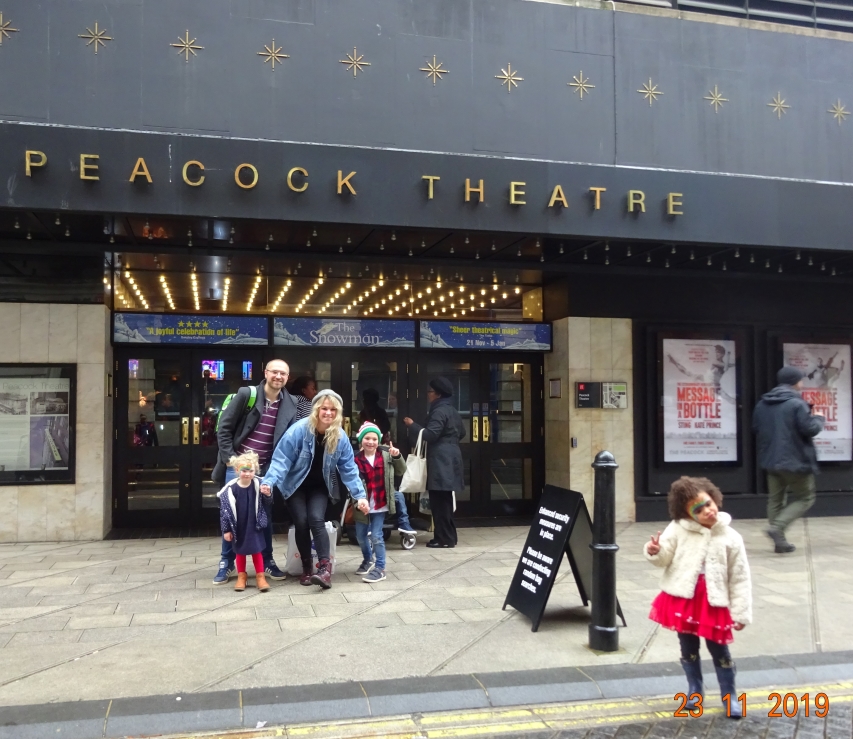 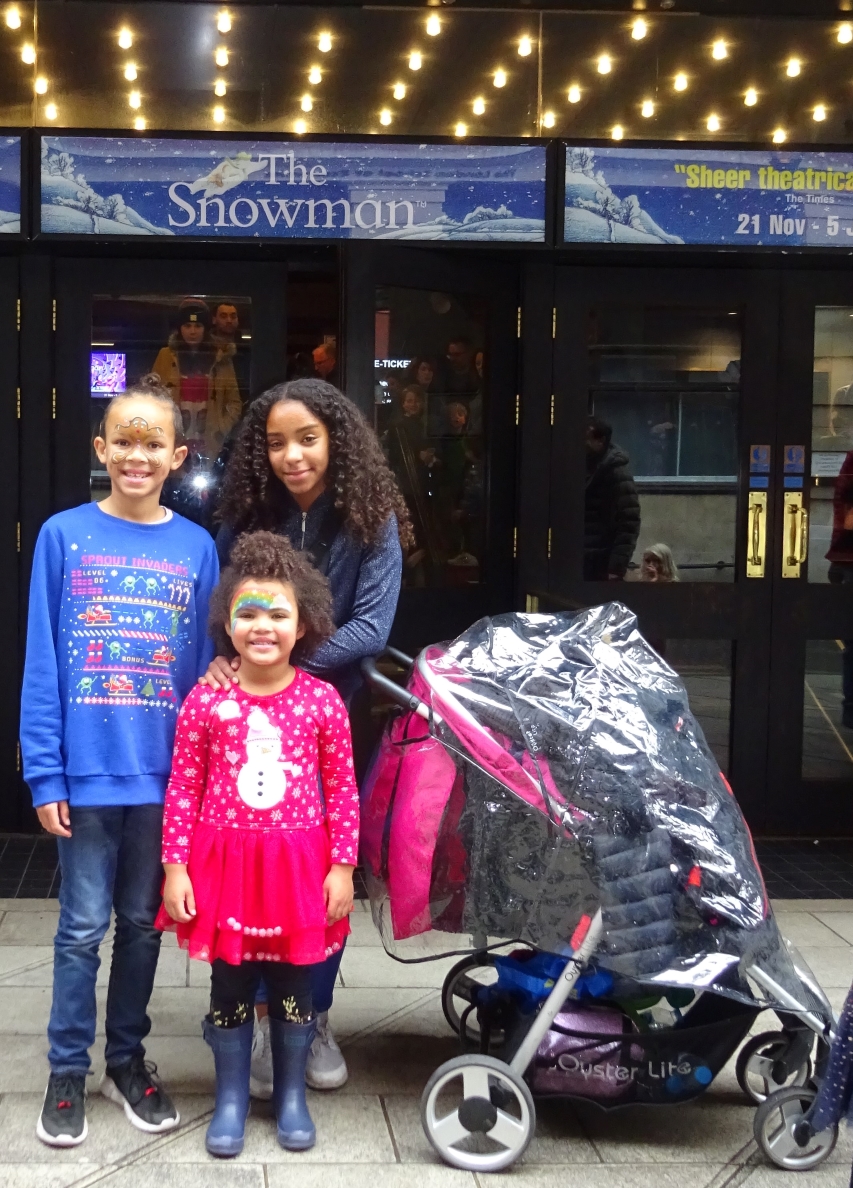 Raymond Briggs’ picture book The Snowman was printed in 1978. Being a girl of the 70s myself I would only have been 5 years of age and I certainly do feel I have grown up with this firm festive favourite which:

has whisked generations of children off to a Wintry wonderland for a festive adventure year on year. Now the Birmingham Repertory Theatre’s magical live stage show journeys back to The Peacock Theatre to charm both young and old for its 22nd consecutive year! Based on the much-loved film and book, the enchanting stage adaptation features exquisite dancing, magic and live music, including the unforgettable classic Walking in the Air: 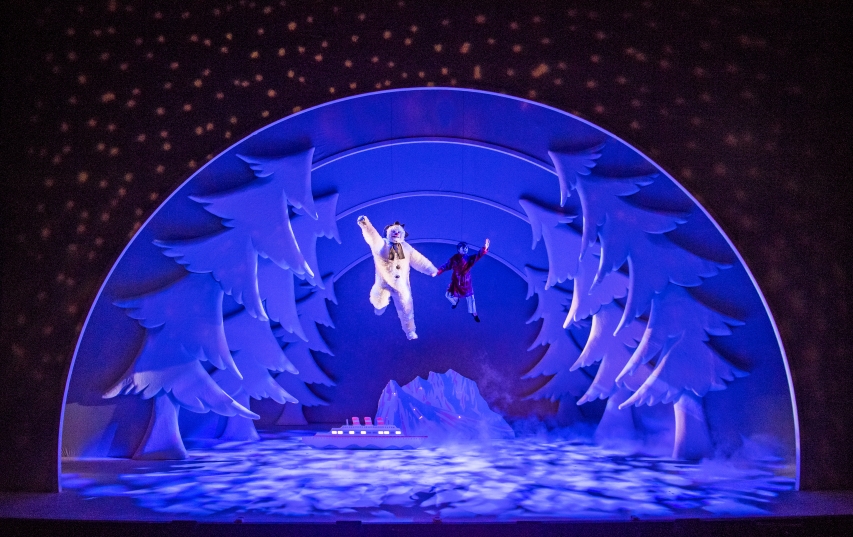 The  young boy of the story, James, befriends the Snowman when he comes to life on Christmas Eve. They have many adventures including riding a motorbike (below), dancing with fruit, penguins, a beautiful (ballerina) Snow Princess (and her wicked beau Jack Frost the show's baddie) and getting up to mischief with a cat. The cat scene was for some reason Lottie's FAVOURITE and she hasn't stopped talking about that scene since. 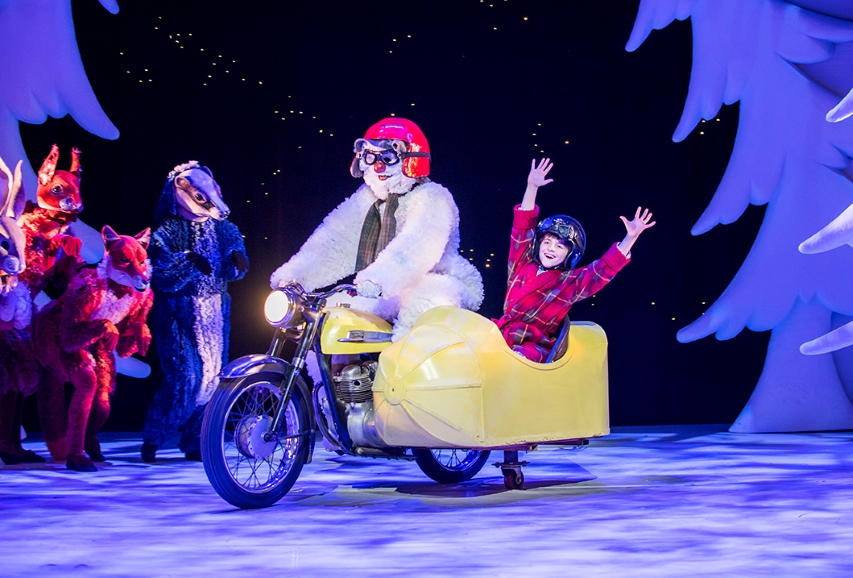 The first half of the show ends with the aerial Walking in the Air scene which is so very moving. After the interval you come back to what feels like a different show with a different pace and tempo featuring none other than Father Christmas himself AND lots of international Snowmen. 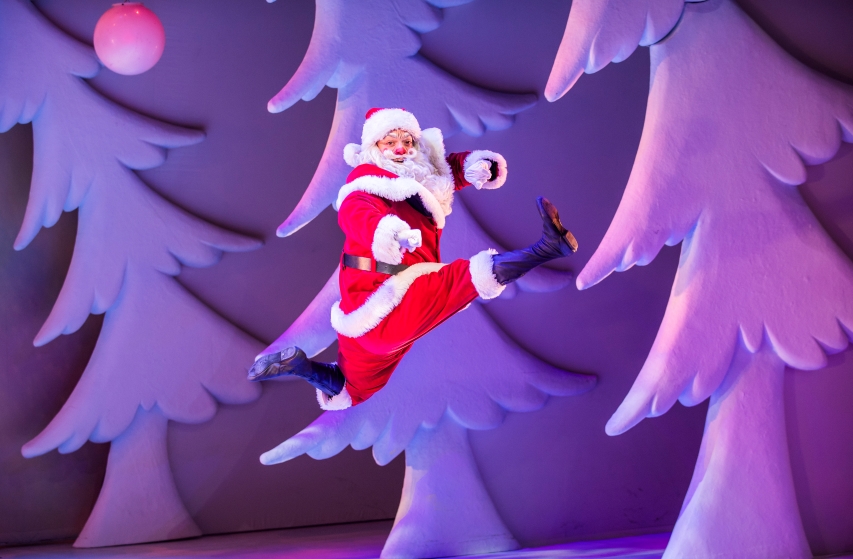 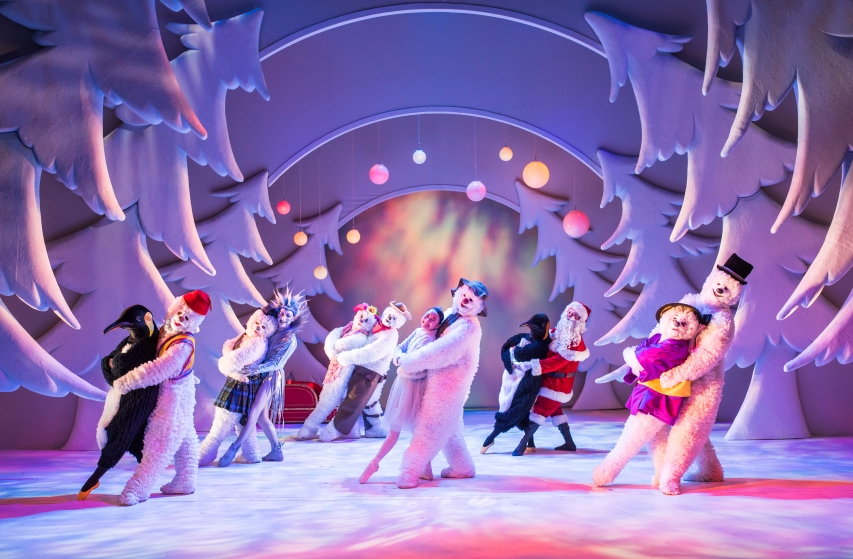 The Scottish snowman above makes me laugh so very much as a couple of times he head butts Jack Frost as both he and THE Snowman are trying to rescue the Snow Princess from Jack Frost - every Christmas Show needs a baddie right. 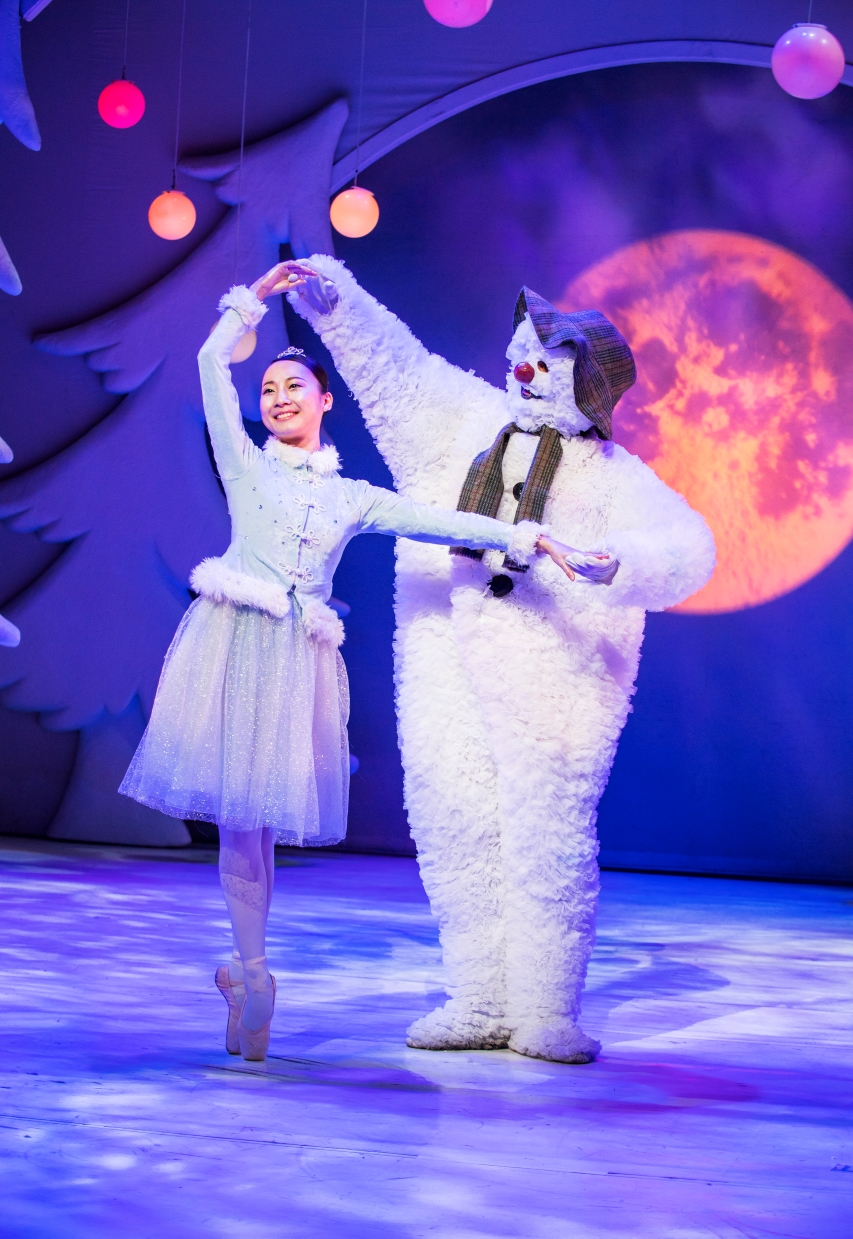 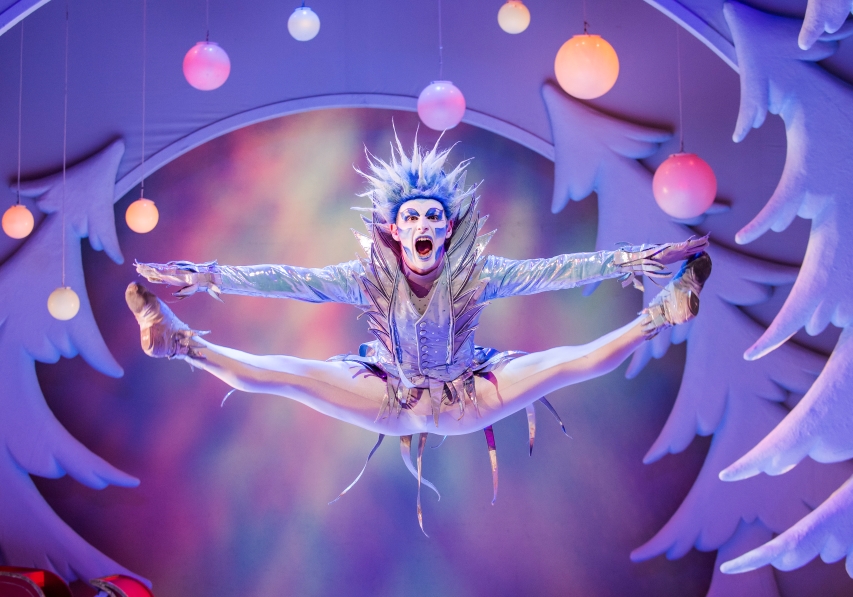 Inspired by the film directed by Dianne Jackson and produced by John Coates, The Snowman has become a must-do Christmas activity, “guaranteed to melt the heart of even the most cynical Scrooge” (The Guardian). Featuring choreography by Robert North, direction by Bill Alexander, design by Ruari Murchison, lighting by Tim Mitchell and timeless music and lyrics by Howard Blake, the performance has been seen by audiences of over half a million at The Peacock.

The Snowman is visiting The Peacock as part of a UK and international Tour.

Suitable for all ages

Our tickets were complimentary in exchange for an honest review
New Mum Online at 14:31
Share

Drop me a line, and I will visit you right back - as soon as I get chance. Thanks for your comment.